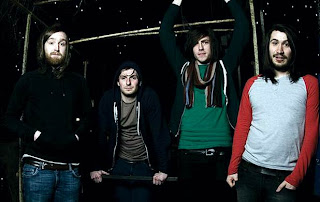 Another Scottish band about to break on through this year are Twin Atlantic from Glasgow.
This four piece like to play it heavy, with boisterous and addictive rock songs that fit like a jigsaw puzzle piece alongside Sam McTrusty's distinguished Scottish vocal.
Having just completed a tour with Taking Back Sunday as well as having previously gigged with The Smashing Pumpkins and The Subways, Twin Atlantic shall be embarking on their own tour in September/October to support the release of their debut mini album Vivarium out in Ireland on September 11th (14th in the UK).
The first single from the album was Lightspeed which you can still download for free from their website and the follow up single due on September 4th is You're Turning Into John Wayne.
It's a song about the invasion of American Culture in different societies today and they have just released the accompanying video.
Posted by The Noises In Our Heads at 22:41