Nonsense In The Dark 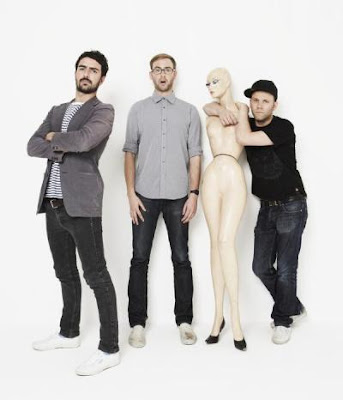 has partied many a night away to the sounds brought to the masses by Olly Dixon and Tim Lawton aka The Filthy Dukes. Add Mark Ralph to the mix and hey, you have yourselves The Filthy Dukes the band. Having earned their stripes promoting club nights, supporting some of DFA's finest (LCD Soundsystem and Hot Chip) and running the ever popular Kill Em All night in Fabric which has featured artists such as Justice, Late Of The Pier, James Murphy and Bloc Party, it's fair to say these guys know how to do it right.

March sees them release their interesting debut album Nonsense In The Dark on Fiction Records.

Guest vocalists feature in their abundance on what can be described as a dirty electro, indie, pop-rock, disco treat. Sam Dust from Late Of The Pier, Brandon Curtis from The Secret Machines and Orlando Weeks from The Maccabees all lend their vocal talent on various tracks.

The band also proudly mention how they acquired a mixing desk once built and used by legendary krautrock producer Connie Plank, who was responsible for producing some Kraftwerk's early records as well as Neu! and Guru Guru, a nice little nugget of info and one they are quite proud of.

You can hear a couple of tracks up on their MySpace and check out the website for a fantastic free remix of their killer tune Tupac Robot Club Rock which you can hear below.

The Filthy Dukes are set to go on tour with The Secret Machines in February and embark on their own tour of the UK in March.